It’s coming up to three years since I started working with Film Hub NI. Sara, Hugh and I combined our forces to come up with a marketing programme for a bunch of independent cinemas across Northern Ireland. This motley crew were united by two common goals: a love of film and a desire to put more bums on seats.

Since that first meeting in a coffee shop in Botanic, lots has changed. I’ve started my own consultancy, Eximo Marketing, and lost a significant amount of hair. I’ve now worked with an even bigger number of independent and community cinemas from the Edinburgh Short Film Festival in the north to the Women Over Fifty Film Festival on the south coast near Brighton.

This question comes up in every session and is almost always the wrong question to start with. I know of companies that spend £5 per week on ads and get a great return and companies that spend £5,000 a week and get a great return. The key part of Facebook advertising isn’t the budget (although that is important), it’s the audience you are targeting.

Facebook are pretty good at suggesting you should mass target when you advertise. Rubbish. Target the group or groups of people you know might be interested and covert them to ticket buyers. By keeping the targeting to a tighter group, your budget reduces, making Facebook a more affordable channel.

For more info on how to do Facebook advertising right (i.e. DON’T just press the Boost Post button) check out this video .

How do we make people care about [insert your genre]

In short, you don’t.

Behaviour change is entirely possible via advertising and content marketing. Look at the stop smoking campaigns or getting people to wear seat belts. But these campaigns spend BIG money to reach people over and over and over again – it’s the sort of marketing that is way out of the reach of any cinema, not just community ones.

Instead of trying to change people’s behaviour, focus on finding more people who are already sympathetic to the genre you’re showing. How do you do that? Look who comes through the door, talk to them and see what they have in common. Use lookalike audiences on Facebook or find groups where people who care about your genre hangout.

There are more variations on the same theme, but they’re all about the same thing: pricing.

Pricing is comfortably the most difficult part of marketing. Too expensive and you worry about putting people off, too cheap and you run out of money to do more great work.

There is no right or wrong answer to this question, you just need to look at all the factors. Any or all of these factors could influence what you charge:

There are more factors, many more, this is just a brain dump in 30 seconds.

Pricing is even tougher because it’s so hard to push them up once people have a perception in mind. If you charge £3 for a screening one month and £9 the next, people feel ripped off, even if it’s the only way you can survive and still £4 cheaper than the nearest multiplex.

As a minimum, work out how much money you need to make to cover all costs, then divide that by the number of people you expect to show up (be VERY conservative on that number) and that will give you an idea.

But this is just a very, very, very rough rule of thumb.

Or you could look at different pricing methods. I’ve seen pay what you can schemes work very well, especially for independent cinemas that are screening films that cover social issues. Full details on how that worked for New Notions are here.

Why sell tickets in advance? It’s easier to just let people pay on the door

The main lesson I picked up in Durham was sell as much as you can in advance.

When people pay on the gate, the weather, the toilet, the time, the ANYTHING gets in the way of coming. When people have paid for a ticket, even a small amount, they get off their backsides and attend.

Selling tickets in advance means you’ll have an idea of how many will show up, if you’ve covered your costs, how much last minute promotion you’ll need… everything becomes easier if you sell in advance.

There’s a question 4b, which is “what is the best platform for selling online” and the easy answer to that is I don’t know! There are so many that have slightly different price points and features you’ll need to research and find out what works for your organisation – or talk to another similar organisation who can help you short cut that process.

Can dinosaurs do digital marketing?

My school was awful. They taught me dinosaurs were these enormous green beasts with big teeth and short arms that terrorised our distant relatives. In fact, dinosaurs are women over 45 using Facebook and men over 40 using Instagram. Or trying to use Instagram.

Don’t hate me, this is entirely evidence based, leaning on what dozens, possibly hundreds, of people have said to me in the last 3 years. 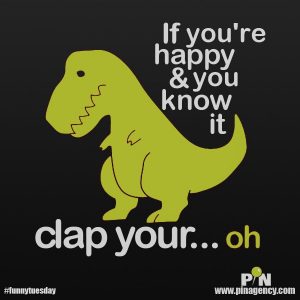 Well, even with the useless arms of a T Rex, I reckon that dinosaurs CAN do Facebook. No, you don’t have to be putting your make up routine on The Gram, but you do need to get to grips with the basics of posting, replying and advertising (see point 1).

Love or loathe social media, the teams behind the social channels do make their products easy to use. Grab a brew, make sure your phone is fully charged and play around with Facebook/Twitter/Instagram/Whatever for a while until you’re comfortable. You’ll be fine, honestly.

OK, so more of a statement than a question, but one that comes around a lot. And it’s incorrect. While selling Mary Poppins may be easier than a film about the Estonian philatelist society, it’s a myth that a big film will sell itself. One mantra stands out from my time marketing tickets for cold cricket matches: make the big bigger.

If you believe you will get a crowd to an event, keep going.

Nothing will help you sell the next event like a full house at this event.

Nothing makes people buy tickets online earlier than the fear that they won’t get in next time.

Nothing will put more funds in your coffers than a sold out screening.

So go hard at the big films and keep going until you’ve sold it out. Then use whatever extra money you’ve made to bring in the stamp lovers from your local area to learn about Estonia.

Is this OK with GDPR?

Never in the history of human kind have so many people been so confused about something (until Brexit shouted: hold my beer). The short answer is that no one has the first idea if your email list is GDPR compliant or not. An even smaller number of people have a clue if you can include a sponsor’s logo in that email.

In short, no one really knows.

The full official advice is on the ICO’s website. My best advice is to err on the side of caution with your database because ignorance is not an excuse in the eyes of the law.

Have any more questions you want answering? Fire them on Twitter and I’ll do my best to answer them.

Andi is one of the consultants for Film Hub Scotland's Advice and Experience scheme. Find out how you can apply for a free one to one session with him, or the wide variety of other consultants specialising in a range of film exhibition related subjects.