Here at Film Hub NI, we love hearing about the successes of our members. Belfast Met joined Film Hub in 2017, helping us to reach more young audiences and students entering the film industry. Last year, Belfast Met’s e3 campus took part in our Branagh in Belfast mini film festival, held in partnership with the Belfast City Council. Belfast Met and e3 train, educate and mentor the filmmakers and film audiences of today and tomorrow. Here, Dr Thomas Scott of Belfast Met reports on some of their recent accomplishments.

Belfast Met’s Year 1 and 2 HND Film and TV Students continued their excellent 17/18 form with a successful summer across festivals, competitions, training, and employment.

At the Sleeping Giant’s Film Festival, which took place in Warrenpoint in July, short comedy Just a Normal Irish Story (made by Ryan Rafferty, Mark Rainey, PJ Wallace, and Joel McReynolds) beat fierce competition (including budgeted shorts) to take home the Best Homegrown Fiction award (pictured above).  Ryan and Mark were also nominated for individual awards at the Northern Ireland Short Film Awards, which took place at the Empire in Belfast, also during July. Mark was nominated for a cinematography award, and Ryan was shortlisted in the director of factual category. Whilst they came up short on this occasion, that they were shortlisted in two professional categories is evidence of the talent of both individuals. In the same month, their fellow group members Joel and PJ received the exciting news that their Media Production business, Kromax Media, has been nominated for a NI Business Award in the Start-up Business Category. The awards will take place on September 22nd.  The group of Ryan, Mark, PJ, and Joel are up for further awards in September, at the 9th Underground Film Festival, and the Disappear Here Film Festival. Ryan Rafferty is naturally delighted with his recent success, stating that “doing well on my assignments was important, but I am glad the lecturers encourage us to get our work out there. Competing against pro-filmmakers has upped my game. Long may it continue”

In further festival news, highly regarded local fest Film Devour recently announced the program for the October show and has officially selected three Belfast Met HND Film and TV 17/18 productions. Three short fiction films, Eschaton (by David Harvey, Nathan Emery, Matt Beggs, and Lewis Allen), Flowers Unwilted (by Andrew Shields and Peter Barr), and Planes, Trains, and Piggybacks Home (by Stacey Burns, Mark Dennis, and Mark Hanna) will all compete for the Director’s Choice and Audience Choice awards. Eschaton has also been officially selected for the Yellow Fever Indie Film Festival, which will take place in October in Belfast. David Harvey, who co-wrote the script and co-produced the short horror remarked that “I am incredibly happy for such a ‘small’ and zero budget film to get exposure to such a wide audience, and to get the recognition that I feel the team deserves.” And in one of the biggest filmmaking competitions in the world, Rode Reel 2018, a first year documentary production, titled It’s a Small World After All, was a finalist in the Best Documentary category. The creators of the documentary short were Andrew Shields, Nathan Long, Emma Bonar, and Peter Barr. The Rode Reel competition receives 1000s of entries from across the world and to be a finalist is an incredible achievement. 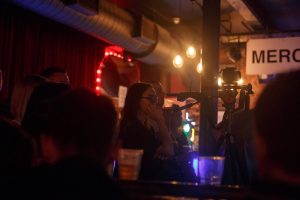 Stacey Burns, who commences her second year of the course on September 17th, fought off stiff competition to gain a work placement at Stellify Media. Stellify produce a number of well-known TV shows, including the new Who Wants to be a Millionaire, and Blind Date. The team at Stellify were so impressed with Stacey’s work that they have offered her a part time job while she completes her HND. Stacey is understandably excited about her time with the company, remarking that “spending the summer at Stellify was the most amazing experience. I’ve learnt so much and had an absolute blast. I’m so grateful for the opportunity and the fact that they’re keeping me on a part-time basis whilst I finish my HND is a dream come true!” Stacey developed a range of skills during her placement; her duties included location recces, interviewing people to feature in tasters, acting as a point of contact for talent, and games testing. She also gained experience in health & safety, contributors forms/contracts, data wrangling, and footage logging. In addition to a successful placement, Stacey has been made a chairperson of RTS Futures NI. Stacey was voted in by her peers in August 2018. RTS Futures NI aim to educate young people in Northern Ireland on the television industry and arrange free masterclasses, Q and A’s with practitioners, and a range of film and TV networking events. As a chairperson, Stacey will play a key role in their remit.

Finally, in training, Ryan Rafferty and Chelsea-Leigh Purdy have gained places on NI Screen’s reputable New Entrant Scheme. Across three days, Chelsea and Ryan will mix with industry practitioners and complete training in set etiquette, health and safety, and first aid. They will complete two industry recognised certificates, including the BECTU Creative Industries Health & Safety Passport, and the British Red Cross First Aid in The Workplace.

Course co-ordinators Tommy Scott and Alan McCracken are immensely proud of their students and delighted that the course is helping them achieve their goals. Tommy remarked that “these achievements are a reflection of the dedication of both our staff and the students, as well as the good reputation we have in local industry. We are privileged to work with students and colleagues that have a genuine passion for the craft.” Alan added "I am happy for the students. We encourage them to find an audience for their work. Whilst doing well on the course is important, we want them to enhance their CVs by mixing with industry practitioners. It will only benefit them"