This year, the NI Science Festival will not only be presenting its main programme virtually, but its film section too.

Many of the titles via QFT Player, others directly through the festival’s website. Either way, from the 15th to the 28th, you will be able to view a whole host of science and educational themed titles and special events.

In regard to films available via the festival website, there is Past, Present and Future of Linen in NI (2021), a three-part mini-series which will be available for free from the 21st to the 23rd and then on demand afterwards. While My Year of Living Mindfully (2020), also available for free on the 22nd, follows a journalist who spends a year trotting the globe in order to discover the secrets of meditation.

Over at the QFT Player, you can see Minute Bodies: The Intimate World of F. Percy Smith (2016), a documentary by musician and Tindersticks member Stuart A. Staples about the eponymous naturalist, inventor, and filmmaker. It uses a mixture of new and Smith's own film footage to immerse itself into this pioneer's life. While Plastic Cup: The Official Story of the Plastic Pirates (2018) follows a boat race where the boats are made out of rubbish and the goal is to support an international plastic-free campaign.

From the 17th to the 24th, you can watch a more experimental documentary in Origin of the Species (2020), which tracks the current world of android development and its ethical implications. On the 21st and 22nd (for 24 hours), you can stream the Wilderland Wildlife Film Festival (2020), which is a wide assortment of short films following life in the wild. While from the 26th to the 28th, Sisters with Transistors (2020) will be available, a history of female pioneers of electronic music, narrated by Laurie Anderson.

More information about these films and the festival at large can be found over at QFT Player and at the NI Science Festival website.

Meanwhile, the Fermanagh Film Club will continue their season on the 24th of this month with Under the Tree (2017), a pitch-black Icelandic comedy about two feuding families. 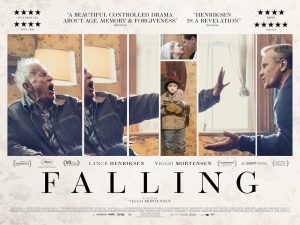 The Strand Arts Centre have also been hosting various virtual screenings. Currently, for a small rental fee, you can see Away (2019), a family-friendly animated fantasy about boy and his motorcycle stuck on a mysterious island. Also Falling (2020), the directorial debut of Viggo Mortensen and which stars Mortensen as a man who brings his Alzheimer’s suffering father (Lance Henriksen) out to live with him in California. Thereby dredging up old wounds and conflicts in the process. They also have two documentaries available with Assassin (2020), covering the sudden and strange murder of Kim Jong-nam, the brother of North Korean Supreme Leader Kim Jong-un. While MLK/FBI (2020), which lays out the extent of the FBI’s surveillance and harassment of the Civil Rights leader and icon Martin Luther King, Jr.

On Friday 26th February, the NIIHR Psychoanalytic Film Club is meeting via Zoom on Friday, 26th February at 7.30 - 9pm to discuss, A.I. - Artificial Intelligence, the first film in their series this year ’The Other: So what are we so afraid of?’.