It's a spooktacular special as FHNI members across NI celebrate Halloween on the big screen, the Collective tour kicks off and Cinemagic finish their 2021 festival in style.

Following the pandemic related hiatus, Film Hub NI will be reviving its touring series Collective, bringing local drama Nowhere Special (2021), about a terminally ill, single father searching for a new home for his young son, to community venues across Northern Ireland. Starting with the Ormeau Community Cinema in The Pavilion Bar, Belfast and The Roe Valley Arts & Cultural Centre in Limavady. Both venues will be screening the film on the 11th of November. 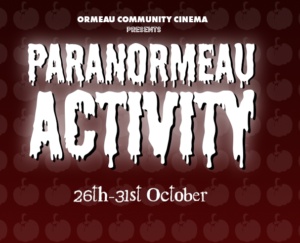 There are many more films to be seen this Halloween, with many of the region’s community cinemas hosting spooky events. The Ormeau Community Cinema have a host of screenings planned across many different dates and venues in South Belfast with their Paranormeau Activity festival. Trick ‘r Treat (2007), an anthology horror comedy, will be on the 26th in the Masonic Hall on Park Road, a key local history lesson with Strand Stories: The Curzon Project (2021) on the 27th in the Pavilion and The Blair Witch Project (1999) in Choice Housing on the Carolan Road.

There will be two family-friend screenings as well, with Wallace & Gromit: The Curse of the Were-Rabbit (2005) on the 29th in the Ballynafeigh Methodist Church and Addams Family Values (1993) on the 30th in the Shaftesbury Community Centre. The festival concludes on the 30th with a secret screening in the Masonic Hall.

On Halloween night, The Black Box will be home to a screening of the unique phantasmagory The Love Witch (2016), programmed by feminist film club Ghouls on Film. On the 31st, Newcastle Community Cinema will be screening the Tim Burton animation Frankenweenie (2012).

While the Fermanagh Film Club in The Ardhowen will be showing the great Kelly Reichardt’s historical drama First Cow (2019) on the 27th, the Pixar produced Coco (2017) and psychological horror Saint Maud (2019) on Halloween night and Icelandic drama The County (2019) on the 10th.

At the Queen’s Film Theatre, their retrospective series The World of Wong Kar-wai, on the legendary Hong Kong filmmaker, continues with his ambitious sci-fi romance 2046 (2004) on the 27th and on the 28th the series will conclude with his last film to date, The Grandmaster (2013), starring Tony Leung in a decades-spanning martial arts biopic. The QFT will also play host to a new restoration of Seven Samurai (1954), the Akira Kurosawa classic starring Toshiro Mifune, from the 29th to the 4th.

On those same dates, you can also see Passing (2021), the directional debut from actor Rebecca Hall, starring Tessa Thompson and Ruth Negga in a drama about a friendship between two mixed-race women living in 1920s America. There will also be two great offerings on Halloween night, including a LUMI presented screening of The Cabinet of Dr. Caligari (1919), the German expressionist classic, and QFT Late showing of The Omen (1976), with an introduction from broadcaster Tim Burden.

This October and November, the Strand Arts Centre will be hosting their own season dedicated to Japanese cinema.

On the 30th, in association with the Northern Irish charity D’Sign Arts, there will be a screening of Listen (2016), a documentary on deaf Japanese artists. While on the 4th, you can see the classic horror film Ringu (1998). The Strand will have more horror themed offerings, in time for Halloween, with BanterFlix and their Dark Hedges Film Festival, which includes a selection of shorts on the 26th and the 28th, and a screening of Frankenstein (1931) on Halloween night.

On the 6th, filmmaker Vincent Kinnaird will be presenting a special showcase of 8mm and 16mm film, showing work by local directors and some classics.

The Strand also have plenty of new releases forthcoming. You can currently see the newest Bond film No Time to Die (2021), the Wes Anderson directed The French Dispatch (2021) and sci-fi epic Dune (2021). The 4th will see the arrival of the new Marvel movie, The Eternals (2021) and from the 6th, you can see Spencer (2021), which stars Kristen Stewart as Princess Diana.

Following a busy month’s worth of screenings, Cinemagic will soon be concluding their 2021 festival. On the 29th, you can see French animation Stinky Dog, Happy Life in Paris! (2019), the adventure tale Yakari, a Spectacular Journey (2020) and Dr. Seuss adaptation The Lorax (2012), all at the QFT, and the 1989 animated adaptation of The BFG at the Ulster Museum.

On the 30th, critic Mark Kermode will be presenting a screening of biopic Queen of Katwe (2016) at the Queen’s Film Theatre, while at the Ulster Museum there will be screenings of Scooby Doo! Frankencreepy (2014), short Room on the Broom (2012) (preceded by a reading of the original book from the author) and Coco.

The festival will then conclude on the 31st at the Ulster Museum, with screenings of the Halloween themed spin-off short Toy Story of Terror (2013) and a witch-themed double offering of Hocus Pocus (1993) and The Witches (1990). More information about tickets and other events can be found on the Cinemagic website.

Movie House Cinemas are also getting into the seasonal spirit with a series of horror movie screenings at their City Side Belfast location. Presented by BanterFlix, as part of Dark Hedges, you can see Jennifer’s Body (2009) on the 27th, Irish production Bring Out the Fear (2021) on the 29th and Wesley Snipes starring superhero movie Blade (1998) on the 30th. On the 30th, at City Side, there will be screenings of Hocus Pocus and The Exorcist (1973), while on Halloween, they will be showing The Rocky Horror Picture Show (1975) and Monsters Inc. (2001).

At all of Movie House’s locations, you can currently see Matt Damon, Ben Affleck and Adam Driver in Ridley Scott’s The Last Duel (2021), No Time to Die and Dune. From the 29th, there will be runs of two new horror movies, Last Night in Soho (2021), starring Anya Taylor Joy and directed by Edgar Wright, and Antlers (2021), and from the 5th they will be showing The Eternals.