Part 3:In his final exploration of the history of cinema in NI, Sam Manning takes an in depth look at the impact of the Troubles on film exhibition from 1968 onwards.

While violence generally declined in the 1980s, new threats to cinema emerged in the form of home video and the greater range of films shown on Channel 4, which began transmission in 1982. But falling attendances meant that many cinemas were forced to raise their prices to make ends meet. This was a source of concern for one Belfast Telegraph reader, who in 1983, ‘took four children, with ages ranging from 6½ to 11 years, to the New Vic cinema… I was horrified to learn that there were no concessions for children in the evening and that the cheapest ticket cost £2.10 for a seat in the stalls… With admission prices as prohibitive as those in the New Vic it is unlikely, they will succeed’. The New Vic struggled on until it finally closed as a cinema in 1987. 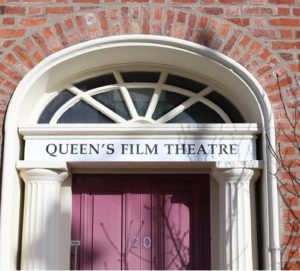 One success story during the height of the Troubles was Queen’s Film Theatre (QFT), which opened in a lecture theatre on the Queen’s University campus in 1968. Inspired by the introduction of Regional Film Theatres across Britain, it aimed to bring the best of international cinema to Northern Ireland. While its south Belfast location was largely free from sectarian violence, the Troubles still impacted its operations. In 1970, for instance, the Film Theatre Committee reported that a run of poor attendance was “largely due to the civic unrest in Belfast” and in the following year, the cinema decided to withdraw The Battle of Algiers (1966) from its programme due to fears that it might inflame sectarian street riots. QFT bounced back from the threat of closure in 1972 and its audiences increased significantly from the mid-1970s, a time when they were in freefall across the UK and Ireland.

As part of the cinema’s 50th anniversary celebrations in 2018, I interviewed cinemagoers about their memories of the venue. A recurrent theme that emerged from the interviews was QFT as a place of sanctuary or refuge from the Troubles. Deirdre Gunn, for instance, told me that ‘Belfast in the 70s was not a good place to be and QFT was one of the few safe spaces there was. People just went because they loved cinema. And it was the only place you could really go into without worrying that it was going to get bombed or you were going to get shot outside’.

The Curzon did better than most suburban cinemas during the Troubles and came through several incidents during the height of the conflict. In January 1972, for example, a sniper reportedly fired shots from the roof of the building hitting one policeman in the arm and the other in the thigh. As police ‘made a torch-light hunt inside the cinema, soldiers searched the roof. But the sniper had got away’. In the following month a car bomb hoax was then left outside the cinema. Attendance reached its nadir in 1973, but the cinema received an unexpected boost resulting from the ABC’s temporary closure from 1978 to 1980. The cinema later divided into five screens and survived another incendiary bomb attack in 1991, which only caused minor smoke damage. It struggled to compete with the new multiplexes and eventually closed in 1999.

After the opening of QFT in 1968, no new cinemas opened in Belfast until the arrival of the Glengormley Movie House in 1990. The Kennedy Centre Cineworld opened in 1991 and in the following year was joined by the Yorkgate Movie House. The latter, reported Screen International, ‘is in a neutral area, at the intersection of two motorways, where both the Catholic and Protestant communities can use the same facilities. There is protected car parking with 1,400 spaces (there is a great deal of joy riding in the city) as the majority of professional people have cars’. In 1993, the MGM then opened in a more central location on Dublin Road. The arrival of the multiplexes led to greater cinema attendance in Northern Ireland as admissions rose from 2.3 million in 1991 to 4 million in 1998.

So, what was the impact of the Troubles on cinema attendance in Northern Ireland? There is no doubt that the conflict exacerbated the downward trend in admissions and physical damage caused many buildings to shut their doors for the final time. Businesses were also reluctant to invest in Northern Ireland cinemas, which partly explains why multiplexes were introduced later than in many other parts of the UK. It is more difficult to measure the qualitative impact that the Troubles had on people’s leisure lives and its long-term influence on social habits. Whatever the impact, we are lucky that two Belfast cinemas, QFT and the Strand (now the Strand Arts Centre), survived the Troubles, both of which continue to thrive and were recently included in a Time Out article listing the 50 best cinemas in the UK and Ireland.