Part 1: Chronic DeclineIn his final exploration of the history of cinema in NI, Sam Manning takes an in depth look at the impact of the Troubles on film exhibition from 1968 onwards.

The 1960s was a difficult decade for cinema operators. Across the UK, admissions fell from 500m in 1960 to only 193m by 1970. Cinema attendance in Northern Ireland followed this general pattern of decline and many venues shut their doors for the final time. For instance, Belfast’s Duncairn Picture Theatre closed in November 1969, just three months after an outbreak of sectarian violence and the subsequent arrival of the British Army in Northern Ireland. 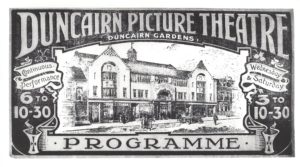 Cinema manager William McDevitt blamed the Duncairn’s closure on the difficulty of ‘getting new films from the big distributors, on the defection of courting couples to musical lounge bars and, inevitably, on the goggle-box’. He added that the cinema’s location on the dividing line between Protestant and Catholic communities led to sectarian vandalism and meant that ‘a lot of people haven’t been coming at week-ends during the riots’.

But what exactly was the impact of the Troubles on cinema attendance in Northern Ireland?

While exhibitors in all parts of Britain and Ireland struggled to compete with alternative forms of entertainment, the impact of violence, riots and bombs was relatively unique to Northern Ireland, creating extra incentives to stay at home rather than travel to the cinema. And as the Troubles intensified during the 1970s, the situation became more difficult for exhibitors. The number of cinemas in Northern Ireland declined from 144 in 1969 to just 25 by 1979. Only with the division of traditional single-screen cinemas into multi-screen complexes in the 1980s and the subsequent construction of new multiplexes in the 1990s did cinema attendance begin to recover.

Cinema buildings suffered physical damage throughout the 1970s. After Belfast’s Lyceum cinema closed in 1966, the Rank Organisation used it as a film storage and distribution centre for its Northern Ireland operations. In 1970, approximately 3,000 films were destroyed when the building was set alight during riots on the Antrim Road. The Belfast Telegraph reported that ‘the burning of the storeroom left Northern Ireland with only about 400 films—those which are at present circulating the cinemas. And it looks, according to one man in the business, as if many cinemas will be fighting to keep their doors open’. The impact was greatest on smaller cinemas that often struggled to obtain the latest films.

Bomb and fire damage caused the permanent closure of some Belfast cinemas. On New Year’s Eve 1971, 250 children were watching The Love Bug at the Classic cinema when assistant manager Agnes McHugh received an IRA warning call. She claimed that the children ‘all went out quietly without any panic’. The Guardian reported that half an hour later a bomb explosion targeted at the adjoining Kensington Hotel ‘smashed the entire back wall of the cinema, pitching the screen into the stalls and bringing masonry crashing from the roof’. The resulting closure of the Classic left Belfast with only four city centre cinemas.

One month later, the Broadway cinema, located on the Falls Road in west Belfast, was set on fire during riots that erupted in response to Bloody Sunday. Extensive interior damage meant that it never re-opened.

In March 1972, an audience of 200 attended a screening of Something Big at Belfast’s ABC cinema. They were evacuated after a warning call but returned to the auditorium after no bombs were discovered in the building. Fifteen minutes later, a bomb exploded in a stolen van parked behind the cinema. Fortunately, only two of the fifty-six injured patrons required hospital treatment. These bombings had a clear impact on cinema attendance. In the same month Sue Lawley visited Belfast for BBC’s Nationwide programme. She observed that patrons were only coming for matinees rather than evening performances, X-rated films were no longer as attractive to teenagers and even in quieter suburban areas mothers would not risk taking their children to family films.

Even if the Troubles disrupted regular cinema attendance, big films could still draw large audiences. In February 1973, Belfast Telegraph critic Brendan Keenan observed a strange sight outside the ABC: ‘The passer-by may stop and wonder who all these people are and why they are standing there like that. And then some half-forgotten memory comes flooding back. Of course, it is a cinema queue. Yes, The Godfather has done it again and lived up to its reputation as the great crowd puller’. But the threat of violence remained, and a picture published in The Times showed patrons rushing back to see the remainder of The Godfather after a hoax bomb warning. This also offered opportunities for the ‘number of new arrivals who had not paid for admission’.