The Cinema Strikes Back

I still remember the first time I stood in the Strand Cinema, in East Belfast. The year was 1990, I was four years old, my family decided against a summer holiday that year, so my dad took my older siblings and I into town to get a toy from the now mythical Leisure World (its memory survives in the form of a multistory car park, like much of Belfast city centre these days).

That day we went to see Don Bluth’s classic animated film The Land Before Time. I’d be lying if I was able to recall the colour of the carpet or what sweets I got that day, all I can tell you is my dad had to lift me out after 20 minutes because of how scared I was and for whatever reason that’s stayed with me ever since. I can’t tell you for sure what the second film I saw in the cinema was, or if I was scared then but suffice to say I’ve been a regular punter ever since.

Fast forward three decades to this vintage year that is 2020 and I’d be lying if I said I wasn’t feeling slightly anxious once again. My first cinema trip since the lockdown.

The process itself was incredibly simple - visiting the Strand’s website via laptop, phone, tablet, choosing the film you want (in my case I couldn’t resist seeing The Empire Strikes Back on the big screen for the first ever time), so far no different from any time I have pre booked a film.

Like bigger multiplexes, the Strand now gives you the ability to select your own seat. In this instance I opted for the very front row. I never pick the very front row. Maybe through some underlying PTSD from being cooped up for most of the last four months just made me want to escape, just this one time, to a galaxy far, far, away.

When I arrived, I was greeted by all the things we’re increasingly coming to expect from our indoor ventures away from home, to make us feel safer and more comfortable in this brave new world - hand sanitizer located throughout, perspex screens at the concession counter, clear concise signage which guides us to our seats, contactless payments, seats blocked out around you. The team at The Strand could do no more. 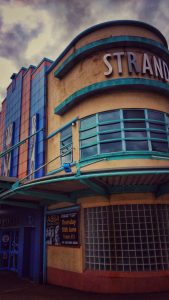 What I didn’t expect, or more specifically what I forgot, was when those lights dimmed there’s a genuine sense of wonder that just takes hold of you that hasn’t gone away. It wasn’t even the opening notes of John Williams’ iconic score that grabbed me first, it was unexpectedly the trailer for Christopher Nolan’s upcoming blockbuster Tenet. First time I’ve seen it on the big screen. The larger than life images, the customary Hans Zimmer drones, the sheer intensity of it suddenly reminded me I have to see it on the biggest screen possible. No TV, no home projector or sound system within my means can replicate that. And for the next two hours I fell in love with that magic all over again and left the Strand through an alternative exit to make my long walk home feeling totally reset.

Now here’s the hard sell. I know I’m waxing lyrically on the Film Hub website to the converted. You love the cinema, as much, probably even more than I do, but I do still worry. It might have been 5pm on a Wednesday, I know it’s early days into the restart but I can literally count on one hand how many people were in The Strand’s largest screen to see The Empire Strikes Back. This is an uncertain time and we might not know one month to the next at the moment, but when we get through it we’re going to need places like The Strand, The QFT and The Movie House there when we do. Support them however you can from afar and when you feel ready let’s watch films.