For the second of his deep dives into the film making heritage of NI, Ruairi McCann goes west to discover the John T Davis classic 1991 documentary, Hobo.

John T. Davis’ place in Northern Irish cinema is complicated not just because his vocation as a documentarian has taken him on a cross-Atlantic exchange, between Ulster and America, but also because regardless of where he is, his films are consistently informed by his status as a consummate, passionate Americophile.

Born in 1947, Davis’ purview quickly expanded beyond his middle class upbringing on Belfast Lough through a love of American music. First it was rock’n’roll and then in his teens he became interested in blues, jazz and country, with modern troubadours Woody Guthrie, Hank Williams and Bob Dylan making the biggest impact.

The America his imagination cooked up out of their music—which would grow under the tutelage of John Steinbeck, Jack London and the Beat Generation—was centred on The West, the road and a life of transience that, though precarious and full of hardships, could wet an individualist’s thirst for independence. Both the realism and idealism of this image was for a young Davis a counter to the stifling, ‘narrow certainties’ of his own homeland’s politics, culture and even geography.

You can see the influence even in his regionalist debut, the short feature, Shellshock Rock (1979), which is a gesamthkunstwerk—stitching together footage of live performances, interviews and staged segments—documenting the late 70s Northern Irish punk scene. Davis is a few years older than most of those involved and yet the distance was mediated by how he identified punk, as an oppositional, working class art, with the iconoclasm of the music and sub-cultures he grew up admiring and to which Shellshock Rock would end up being his way-in to exploring.

For the attention the film received stateside earned him work over there, leading to a run of films that includes Hobo (1991). This film, perhaps his best, is Davis’ at his most concentrated, in both examining and elegizing a latter day American life lived with ‘no gods, no masters’.

The germ of the film was a Harper’s Bazaar article, written by a Bruce Duffy about the hobo lifestyle. The piece gripped Davis, who was long interested in the figure of the hobo, as it recurs throughout his influences. While reading the article, a particular personage popped out. An experienced hobo dubbed Beargrease who appeared to Davis an exemplar of this ideal, of the hobo as bohemian. What Jack London would have called a ‘tramp-royal’ ‘blown in glass’.

Determined to make a portrait of this man, Davis tracked him down to a convention in Iowa and then, with BBC money and a skeleton crew in tow, proceeded to shoot Beargrease over the course of three months and two trips. The first taking them from Iowa to Minnesota and the second from North Dakota to Washington state. 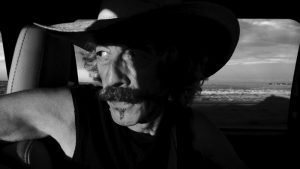 Davis’ style of documentary seemed the best possible fit for a subject so fly-by-night. For his form was inspired by his hero D.A. Pennebaker, a key figure the mid-60s Direct Cinema movement which aimed to get closer to ‘the truth’ by taking advantage of new developments in lightweight, handheld cameras and synch sound equipment to craft a less didactic and more immersive form of non-fiction cinema. For Davis, these innovations brought the persona of a filmmaker appealing close to the kineticism of a rock star and made for a flexibility difficult or impossible to attain when weigh down military sized production. And yet he was inclined to go a step further, using a second cameraman for cover while he took his equipment train hopping and sleeping rough. His aim was to record the sights and sounds of the hobo lifestyle as unadulterated and intimately as possible.

The resultant film achieves this goal, following Beargrease, either alone or paired off with other hobos, through pit stops in sleepy Pacific Northwestern towns or aboard freight trains that tear through miles after miles of open farmland and wilderness. Davis captures the strikingly monotonous quality of these landscapes beautifully, with the hazy light of magic hour magnified by the graining of the 16mm image.

It is a life that Beargrease states has its lonely moments. Yet boredom and solitude can also be constructive states, for they grant the time and mental space to develop your ego, to think ‘that one more thing that hasn’t been thought’. The only other alternative, he says, is the rat race. To succumb to the demands of a modern capitalist economy where your hours are eaten up striving for someone’s else’s wealth and where your self-esteem is shot, kowtowing to a generally inflexible hierarchy.

This philosophy is elucidated on-screen, in interviews with Beargrease and in his chats with other hobos, and through Beargrease’s narration, where he also lists the practicalities and dangers of the life. How your itinerary is often dictated by the elements, the availability of subsistence cheques and the generosity of certain missions. How it is not too hard to wind in jail for vagrancy or worse, seriously injured, or even killed, from falling under a train or at the hands of a trigger-happy railroad guard.

Despite the supposed impartiality of the observational style and the lack of effacement when it comes to grit, the film’s initial tone has more than a touch of idealization. This is built into the structure. For the first third is marked by his companionship with a younger, less experienced hobo. The effect of this dynamic is that it amplifies Beargrease’s already striking presence; an iron-jaw with a patina of stubble, dramatically defined by the shadow of a battered Stetson. Coupled with an easy manner and patter that effortlessly flows between realist and wry, and dowsed in a stolid and paternal light, it elevates him from mere man to a philosopher king of the road, endowed with the self-possession of a western hero-cum-pole sitter.

Though Davis is never heard or shown on-screen, he directly encourages this impression through music. Interspersing his own country score with Dylan and Guthrie tunes, placing his subject in the tradition of the self-styled vagabond. There is also a prominent, early use of Ennio Morricone’s ‘Harmonica’s Theme’, cribbed from Once Upon a Time in West (1968) —another European’s vision of the west—where it signals the presence and purpose of Charles Bronson’s lone wanderer.

As the film goes on though this idea of the hobo as someone heroically liberated from the social contract and its chains is challenged. For one, Beargrease’s status as a free agent is not total.  He has one significant connection to sedentary life, his teenaged daughter, with whom a relationship is tentatively maintained, from telephone booth to telephone booth. Privy to their calls, Beargrease attempts to provide any parental guidance come across absurd not only because of his absence from her but because it is an attempt to exert authority which sits alongside and runs contrary to his repeated assertions that one’s own independence matters above any and all other commitments. 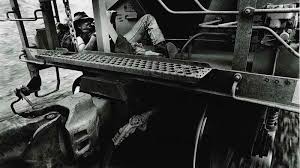 Then there is Duffy, a middle-aged man who Beargrease and Davis meet in Spokane, where he subsists off the cans he collects and then sells. In one of the most captivating scenes, delivered in one long close-up, Duffy tells of how his old life, oriented around his family and a career as an ad executive, became mired in alcoholism and marital troubles. Culminating in a catastrophic event, the memory and guilt of which led to a semi-conscious slip into homelessness. While for someone like Beargrease, the hobo life is a logical development of an adult life that has proved ill-suited for settling down. Duffy’s condition on the other hand, is an inability not only to cope with settled society but inability to cope at all. Unlike Beargrease, being hobo is not a routine and rubric by which he can live by, but instead a living death.

It is this intervention, of an example of how social alienation is not something you can just opt of but instead be crushed by, that makes Hobo. It doesn’t completely dispel any of Davis’ or Beargrease’s romantic notions but instead exists alongside them to create a more complex portraiture of a west that is both renegade and lonely.

Hobo is available to watch on the QFT Player