“There is a point in Helen Cammock’s film The Long Note when Bernadette Devlin McAliskey neatly captures women’s invisibility in the story of northern Irish civil rights. She says that 'a whole history that didn’t belong to me' was ascribed to her, referring to her own notoriety in the period and the fact that people will often say she was at protests, riots or other key events that she actually had no part in. This, she argues, is because 'women get amalgamated into the visible one woman' when history gets told. The media and the political establishment need their headline-friendly figure and any other women who were actually there fade into the background.

The Long Note, which focuses explicitly on women in Derry, exists in the context of such commemoration, a context in which questions around who and what gets remembered are crucial for present realities. While the film uses the voices of well-known individuals such as activist journalist Nell McCafferty, the voices of the other women who were involved in the conflict are just as important. Archive footage and interviews highlight the political work performed by women in public and private settings.”

The above excerpt is taken from Eli Davis analysis of The Long Note: ‘How The Long Note tells the histories of the women of Derry‘. RTE Brainstorm.

The Long Note will run from the 9th – 28th November in The Beanbag Cinema. The film will run on a loop. You can call in between 11am and 4pm, Tuesday to Saturday within these dates to view the film. 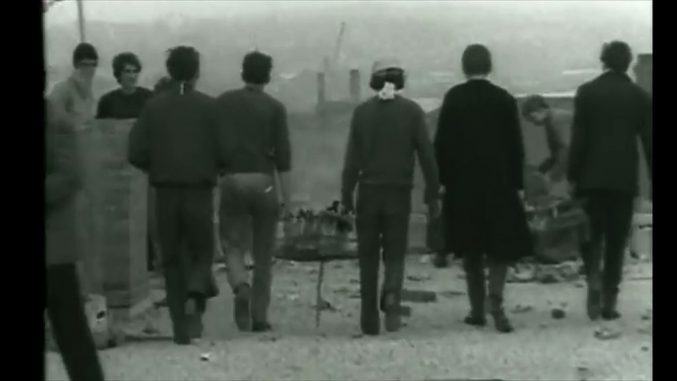