Tomorrow is Saturday is an intimate, fascinating portrait of renowned Irish collage artist Sean Hillen – a brilliant, complex, unruly mind hemmed in behind a lifetime’s collection of hoarded junk, unfinished art and precious memories at his tiny Dublin terraced home.

Diagnosed late in life with Aspergers, Hillen has reached a point in his career where he finds it almost impossible to work. Trapped in a tiny terraced house, full to the brim with junk, unfinished art and boxes of memories, Sean embarks on a journey to declutter and make sense of his life as he waits the arrival of his beloved Amy – an American woman with whom he communicates daily but has never met.

Sean Hillen was born in Newry and grew up during some of the most troubled times that city has faced – the film very skillfully traces Hillen’s childhood and and how it has influenced his contemporary work and situation. 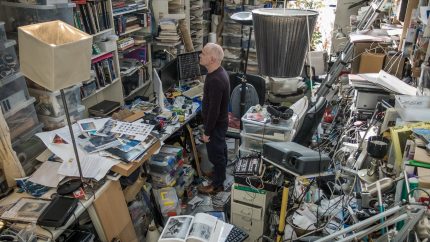