Watching a film in a crowd is always a memorable experience.

Family screenings, silver-screen classics, documentaries or quirky one-off happenings, and a whole lot else too! 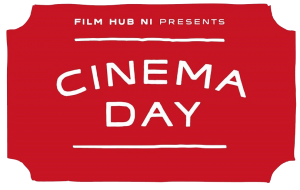 The participating organisations were:

Most of the screenings were free or low-cost!

Celebrating the diversity and scope of film exhibition across Northern Ireland, Cinema Day is an initiative presented by Film Hub NI (part of the BFI Film Audience Network) and supported by Northern Ireland Screen.