Aaron Guthrie, of New Notions reports on his time at the Cannes Film Festival.

I’m keeping this report simple, exploring the 3 Days in Cannes program. In doing so I hope this blog provides more value to you, an 18-28 year old human who may go next year.

Cannes Film Festival has literally the most exciting access program for 18 to 28 year olds across the world at the moment - 3 Days in Cannes (3DIC from here). Last year was its first to welcome around 800 youngsters to sample the festival with free accreditation. I attended this year with about 1500 others - with the sun out, the canvas bags navy and orange, and the pints expensive.

I spotted this tweet about the program, applied in 3 minutes with a motivation letter, and 2 weeks later they replied, accepting me onto the program. I honestly didn’t think I’d be accepted - applying for programs like this across Europe can often feel like a long-shot. I then spoke with the always supportive Hugh, Sara and Jennie at Film Hub NI and applied for bursary support.

If you’re after the details of the program, and where to apply, you can read more about it here. Though some topline thoughts: The 3DIC pass gives you access to the Official Selection (Competition, Out of Competition, Special Screenings, Un Certain Regard, Cannes Classics, Cinéma de la Plage) and to the Palais des Festivals, so really, you get to go most places!

There are two slots to attend; the first 3 days of the festival (15-17 May) or the final 3. I applied for the final days (23-25 May) which turned out to be the better choice for these two main reasons:

As you may already know, no matter your accreditation level, chances are you’re likely to be queuing for an hour for each screening. For films enjoying good critical reception and playing in the Palais, increase that queue time to nearly 2 hours. Though by the end of the festival, most of the film market has closed and most of the press have left, so queues are (usually!) quieter.

Secondly, only for the second set of dates, a 3 screen cinema—Les Arcades—is programmed for 2 days, only for 3DIC gang. This was where I watched most films. You had more relaxed security guards, and less queuing times (usually). Since the majority of the films I wanted to see were programmed here, I danced a happy, convenient loop of watching films all day in Les Arcades - here’s that program:

You also have the opportunity to apply for invitations to gala screenings in the Grand Theatre Lumiere, and walk the red carpet! I didn’t get any gala ones but I got an early ticket for The Traitor, (no dickie bow required for early screenings in the GTL) but I passed it onto someone else to watch Xavier Dolan’s Matthias and Maxime. I still think I made the correct decision ;)

Each evening there is a film screening à la plage. It feels real wholesome watching Easy Rider in remastered 4K, in a deck chair, with a blanket cutting the sea breeze, hearing the ebb of the waves alongside you.

Even though it’s only three days, you can pack a lot of viewing into those if you try. My total film count was 10, including many of the most well-regarded of the festival.

These are the films in competition I watched, ranked!

I will not give you tepid one liner reviews of the films I watched, because there are more qualified and erudite people than me to do that. And since you probably already know where to find them, go read them and join the discussion. Apart from Atlantique. I suggest you read nothing of it beforehand. 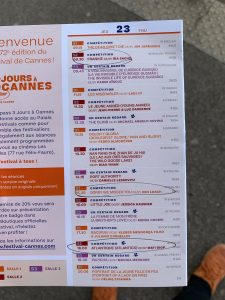 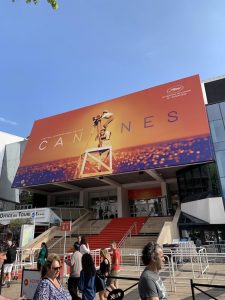 It is honestly a thrill from beginning to end. Standing in a queue for an hour blinks by whenever you strike up a conversation with another 3DIC’r. I’ve met lovely humans from places like France, Italy, Ukraine, Germany, Russia, and Peru doing vastly different things but with cinema as the thing connecting us all. I learnt tricks of audience development from some, chatted to others about how to best use Facebook ads to sell events, and learned new words from many patient French speakers.

If you’re thinking of attending in the future and want to reach out to me, I’d be delighted to share tips on where to stay, how to manoeuvre the festival, where to join the online groups for attendees and otherwise handy things I would’ve liked to have known - it can feel daunting! All the logistics, which seem so impenetrably opaque from a distance, will become quite easy once you go for the first time.

Three days gives you enough exposure to get a real feel for Cannes—with all its amazing aspects—so you’re no longer in the dark when it comes to attending to full festival or market later.

Thank you so much Film Hub!