Northern Ireland’s cinema history is a subject that continues to attract public interest. This is clear not only from the number of publications, talks and exhibitions on the subject, but also from the media interest it generates.

For instance, a recent documentary detailed the history of Belfast’s Curzon cinema and it was only a few weeks ago that BBC Northern Ireland featured an article on ‘The Golden Age of Belfast Cinemas’. As a historian of cinemas and cinema-going, I welcome the public attention given to my area of research. Sometimes, however, I wonder if the focus on Belfast’s ‘picture palaces’ has been at the expense of the many smaller venues in rural locations which were a central presence in communities across Northern Ireland during cinema’s heyday in the mid-twentieth century.

I was recently given an opportunity to explore this hidden cinema history when Film Hub NI received a letter from the niece of R. S. McIlwaine, former proprietor of Crumlin’s Camlin cinema. The letter recounted stories of this small, rural cinema and included a newspaper article, photograph and several programmes. Despite my interest in Northern Ireland’s cinema history, I had no knowledge of this venue and it does not feature in Kevin Rockett’s extensive and comprehensive history of film exhibition across the island of Ireland.[1] The letter piqued my interest and I sought to find out more about the Camlin’s history. 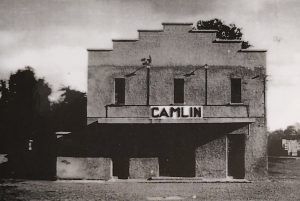 The cinema was founded and built by John James Hanlon in the 1920s, at a time when many other cinemas were popping up in small towns across Britain and Ireland. The picture above shows the cinema’s simple, unadorned façade and its rural surroundings in Crumlin’s market yard. There are very few records of the cinema’s early years. The first and only mention of the Camlin in trade magazine The Bioscope appeared in 1931. It claimed that while ‘Northern Ireland has been very slow indeed in going all ‘talkie’’, the Camlin was one of several provincial cinemas that would soon convert to sound. The Camlin clearly survived this transition (many others didn’t) and a 1934 programme shows that the cinema opened on Thursday and Saturday at 8 p.m. Its prices—one shilling for the balcony and sixpence for the stalls—were similar to Belfast’s smaller inner-city picture houses.

The cinema’s location next to RAF Aldergrove (now Belfast International Airport) meant that it acted as a point of cultural exchange and provided entertainment for the American servicemen stationed there during the Second World War. The proprietor’s niece stated that the stockings, chocolate and perfume brought over by the Americans attracted many young females who eventually travelled to the US as GI brides.

A listing in the 1950 Kinematograph Year Book shows that the cinema was then operated by R. S. McIlwaine, had 400 seats (small in comparison to many other cinema of the time) and screened one show daily. The cinema’s policy of changing its programme three times a week was common among smaller cinemas that often exhibited older films and placed emphasis on renewal.[2]

The cinema’s printed programmes provide further information on its exhibition practices. By 1954, the price of admission had increased to one shilling for the stalls and two shillings for the balcony. The programme’s warning that ‘ALL CHILDREN MUST PAY’ indicates that many youngsters evaded payment. This corresponds to the experiences of many 1950s cinemagoers, who recall children opening fire exits to let friends in for free.

Coming attractions at the Camlin included Desert Rats, The Young Caruso, Fair Winds to Java, Thunderbirds, The Star and Bride of the Gorilla. Crumlin residents had to wait longer than their Belfast counterparts to see the most popular Hollywood films. For example, Road to Bali, a comedy starring Bing Crosby, Bob Hope and Dorothy Lamour, played at Belfast’s Strand cinema in March 1953. A likely well-worn print of the film didn’t arrive at the Camlin until September 1954.

In April 1958, the Camlin screened The Smallest Show on Earth, a British comedy that tells the story of a young couple who inherit a down-at-heel fleapit cinema. I have no pictures of the Camlin’s interior, but perhaps the film’s depiction of rickety projectors, faded décor and crumbling surroundings reminded them of their immediate surroundings. In the 1950s, cinema attendance went into freefall and many cinemas closed down. Smaller, older, independent cinemas were unable to modernise and to compete with television or the wider range of leisure activities available to young people. The Camlin finally shut its doors in 1962. 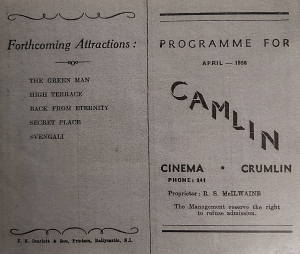 The Camlin was gone, but not forgotten. In 1983, Rodney Mairs wrote to the Belfast Telegraph asking if any other readers had frequented the cinema. He recalled that ‘It was the town dream palace in the market yard’.[3] I have no doubt that others have thought about the Camlin since the publication of this letter and I suspect that its history (and that of many others like it) is hidden in the lofts, basements and minds of those who watched their favourite stars projected on the silver screen. If you have any memories and photographs of the Camlin, please do get in touch. There is still a lot more to be discovered about cinemas like the Camlin and the social role they played within their local communities – I look forward to finding out more about Northern Ireland’s hidden cinema history.