For anyone interested in East Asian cinema the first half of March has a lot to recommend.

As the Belfast Film Festival’s Chinese Cinema season moves to the Beanbag Cinema and back to the country’s periphery for its final two screenings, The Silent Holy Stones (2006) on the 10th and Soul On A String (2017) on the 15th. While that season is winding down, another is just beginning. Throughout March, the Japan Foundation will screen a wide selection of Japanese films at the Queen’s Film Theatre. Starting with newer titles such as Organ (2019) on the 1st, The Actor (2015) on the 8th, Lying To Mom (2018) on the 14th and documentary, Kagegurui – Compulsive Gambler (2019) on the 15th. 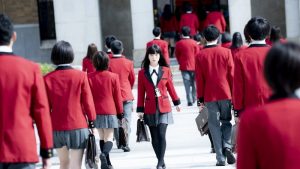 From now till the 5th, you can see an acclaimed queer French period piece, Portrait of a Lady on Fire (2019), which includes a special Bird’s Eye View screening on the 2nd that will be followed by a drawing workshop hosted by Real Sketchy.

Alongside True History of the Kelly Gang (2019), a thriller based on the life of an infamous Australian folk hero, and Color Out Of Space (2019), a psychedelic horror starring Nicolas Cage and based on a story by H. P. Lovecraft, QFT will also give two documentaries multiple showings with Toni Morrison: The Pieces I Am (2019), a portrait of the late great author, showing on the 6th to the 9th and then on the 11th.

Then on the 7th, 8th and the 11th, Talking About Trees (2019), a documentary about a group of Sudanese filmmakers’ attempt to open a cinema in a country where exhibition is a taboo. Back in the realm of fiction, but one based on a true story, Sulphur and White (2020), a dramatization of mountaineer David Tait’s struggle with the traumatic childhood memories of abuse, will screen from the 6th to the 12th.

Several independent dramas and new films from acclaimed world cinema icons will open on the 13th and continue their runs into the back half of the month. This includes And Then We Danced (2019), a Georgian romance, and Irish drama Calm With Horses (2019), starring Barry Keoghan. Brazilian filmmaker Kleber Mendonça Filho’s new genre inflected drama Bacurau (2019), starring Sonia Braga, also opens on the 13th

Events about music, literature and feminism through the lens of cinema can be found throughout the city of Belfast over the next two weeks. The Brilliant Corners Jazz Festival continue their film programme in the Beanbag Cinema with documentaries The Jazz Loft According to W. Eugene Smith (2015) on the 6th and Mama Africa (2011) on the 7th.

Cinemagic and their On The Pulse series will run from the 8th to the 15th. Showing a wide range of animated and live action shorts based on the children’s fiction of Michael Rosen, Julia Donaldson and others. One highlight would Family Matters, a selection of shorts on the theme of family which will be screened in the No Alibis book shop on Botanic Avenue on the 8th.

Over at the Strand Arts Centre on the 5th, the Steven Spielberg directed Close Encounters Of The Third Kind (1977) will be shown. Followed on the 8th by another classic with a 35mm screening of Legally Blonde (2001), presented by Banterflix for International Woman’s Day.

International Woman’s Day is a key date in the calendar of Northern Ireland’s network of community cinemas. For the Portrush Film Theatre, based in the town’s Playhouse Theatre, will have a double bill on IWD of Woman At War (2017), an Icelandic eco-themed black comedy, and Feminista (2020), an anthology of feminist documentary shorts.

Feminista will also be screened by the Newcastle Community Cinema on the 10th but before that, on the 6th, they will screen veteran documentarian Kim Longinetto’s Shooting The Mafia (2019), followed by a Q&A with its producer Niamh Fagan. While over at the Braid Film Theatre in Ballymena, they will be celebrating a more ominous date with a screening of the classic slasher, Friday the 13th (1980), on that day.

On the 14th, Queen’s Film Theatre will host a dementia friendly screening of Butch Cassidy and The Sundance Kid (1969), starring Paul Newman and Robert Redford.

Outside of specific events, audio description and subtitled screenings are available, depending on the showing and inquiry, at the Queen’s Film Theatre, the Strand Arts Centre and all Movie House, Odeon, Omniplex and IMC sites. All of these venues also provide free carer tickets on request.