Whether you are a documentary industry professional or an aspiring factual storyteller, check out the Docs Ireland Industry programme!

This year we focus on collaborating with Europe and European co-production, discuss mental health in documentary filmmaking with The Whole Picture programme, explore Fair Use For Documentary Film Archive with Elizabeth Klinck, and host a series of events in partnership with BBC Northern Ireland.We are also delighted to present for its fourth year the Northern Ireland Screen Documentary Pitch in association with Yellowmoon. On Saturday, 2 July at 2:30pm in the Ulster Museum, five projects will pitch to a panel of leading industry panelists and a live audience. Only one pitch will win an award of £7,500 towards a feature documentary. Check out the shortlisted projects here. 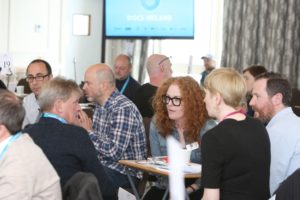 Make sure you grab one of our delegate passes (Full Price £85 / Student Price £55) and come join us for a range of industry events, screenings, networking and social events!For film lovers we
have Film Passes available for only £50!BUY NOW
The Whole Picture
Featuring speakers from both the Irish and UK doc industries, this session will look at how we can improve mental health and wellbeing in production, and whether mentally healthy productions are possible. We’ll show how the Whole Picture Toolkit was created with the industry to combat causes of poor mental health, taking participants through easy actions and changes to implement, and showcase other work in this space designed to combat issues including bullying, harassment and poor working practices.
Friday, 1 July 2022 - 10:30am @ Europa Hotel
Documentary TV Series Case Study: Once Upon a Time in Belfast
Currently in production in Northern Ireland, BBC’s Once Upon a Time in Belfast (working title) is the highly anticipated follow-up series to the critically acclaimed Once Upon a Time in Iraq.The series team will discuss the process of developing the project, including the research and casting process and the practicalities around structuring the narrative of such an expansive episodic piece of documentary filmmaking.
Friday, 1 July 2022 - 11:45am @ Europa Hotel
Spotlight On European Documentary Festivals
Join representatives from a number of prestigious European Documentary Festivals to learn more about their festivals' individual ethos and curatorial practices, as well as creative collaborations, and how they work with filmmakers in supporting and promoting their work and careers.
Friday, 1 July 22 - 2:00pm @ Europa Hotel
Co-Production In Practice: Young Plato Case Study
Universally acclaimed, Young Plato, directed by Neasa Ní Chianáin and Declan McGrath was funded via a four part European co-production, including the Republic of Ireland, Northern Ireland, Belgium and France.In this  in-depth session, the creative team will dissect and demystify the funding process for the project. Speakers include Jackie Doyle, NI Co-Producer of Young Plato, Neasa Ní Chianáin, Director of Young Plato and David Rane, ROI Producer of Young Plato.
Friday, 1 July 22 - 3:15pm @ Europa Hotel
Building Successful Partnerships With Europe
Presented in partnership with Creative Europe Desk Ireland, we have invited an assembly of experienced European documentary producers to discuss the process of working with their respective countries; providing insight into their individual funding systems, sources of finance available, and general information on the intricacies of both their creative and bureaucratic processes.Event will be hosted by: Brigid O’Shea, Founder of Documentary Association of Europe.Companies represented include: Corsa Films from Germany, One of the Guys fom The Netherlands, Sisyfos Film from Sweden and D1 Film, Czech Republic.
Friday, 1 July 22 - 4:30pm @ Europa Hotel

Audio Doc Showcase: Assume Nothing – The Heiress and the General
Gain an insight into the making of a BBC Radio Ulster factual documentary podcast and join Conor McKay (Producer) and Marie-Louise Muir (Presenter) as they talk about their recent podcast Assume Nothing: The Heiress and The General. The popular podcast series is six episodes and during this event you will have the opportunity to sit back and listen to two of these episodes.
Thursday, 30 June 2022 - 2:30pm @ Crescent Arts Centre

The Move from Linear to Digital: Docs on the BBC iPlayer
The BBC is pivoting from traditional TV into the digital iPlayer environment. So what does this mean for documentary and the BBC’s documentary commissioning? In this session, Eddie Doyle, BBC NI’s Head of Commissioning shares the latest information on what’s working and why
.Thursday, 30 June 2022 - 4:30pm @ Crescent Arts Centre

SPECIAL GUESTS AT DOCS IRELAND
We welcome a host of special guests to Docs Ireland this year. Hear from industry professionals and get involved in some panel discussions debating current, hot topics. We’ve listed some of our favourites below!